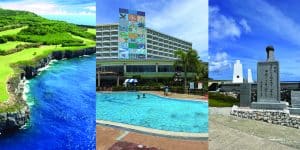 10 Best Things to do in Saipan (Northern Mariana Islands)

Although small, there are several fun things to do in Saipan.

I mean, it’s a tropical island in the middle of the south pacific, so you can bet there are things you can do to enjoy your time in Saipan.

If you are traveling there for work, fun, or whatever reasons, you might find yourself in one of many south pacific islands.

I’ve been to Saipan twice, loved it, and I recommend it to anyone looking to get away for a nice vacation.

I was there for a funeral of a fellow comrade on one occasion and then for my kid’s soccer.

I’ll also be heading back for more soccer come December, so I’ll be sure to try to uncover any gems while I’m there.

Being a frequent flyer of this piece of land in the southern pacific part of the world, I think it’s safe to say I know a thing or two about the island.

So, if you plan on heading that way, here are some of the better things you should do in Saipan.

10 Fun Things to do in Saipan

There aren’t many things to do in Saipan, but there is enough fun if you plan on visiting for like a week or two.

I personally think a week is enough, but go with whatever your travel plans allow.

Maybe do some island hopping in the south pacific?

But, if you do plan on going through the Northern Mariana Islands, here are some things to do in Saipan that can help you enjoy your time.

1. Get Some Local Eats

When we travel to a new country, we first look forward to trying a lot of the local cuisine.

Saipan is known for its Chamorro-style dishes, and they incorporate it in some of their franchise restaurants as well.

If you’re looking for a twist on breakfast, check out KFC and ask them for their fried rice.

Be prepared to eat, as Saipan does not hold back on its portions.

Obviously, I’m a golfer, and that’s one of the first things that I look for when I’m in another country.

But don’t think I’m biased and only adding this to the list of things to do in Saipan because I like golf.

Golf in Saipan is different.

The lines to play at that course blew my mind and after playing, I know exactly why.

If you ever find yourself in Saipan – and you like to play golf – Make it a point to get a round in at Lao Lao Bay Golf Resort.

Out of all the things to do in Saipan, going to the beach should be on your list, especially if you don’t have any.

I’m not the biggest fan of beaches, and that’s probably because I live on an island.

However, I do love to take my kids there, and I am very much amazed at the beauty that they bring.

Saipan has some of the nicest beaches you will ever see, and you definitely want to check them out, as you don’t know when you’ll visit again.

You can visit BLANK BEACH and BLANK BEACH if you want to check out some of their nicest beaches.

One of the best things to do in Saipan is definitely sightseeing.

With the beautiful weather and tropical climate, you can bet that there are some nice sights to check out while you’re in Saipan.

There is a lot of history that comes from such a small island and it’s worth checking out if you are looking for things to do in Saipan.

The first thing I would recommend is going to the Grotto.

I like to look at it as a cave in the ocean.

It requires a walk down some stairs, but it’s the climb back up that you might want to worry about.

You can swim there, but at the very least, walk down those stairs and see the beautiful color of the water.

For more sites, you should go to Bonzai/Suicide Cliff.

This is one of the best sites to see as I’m sure you can tell what happened there.

It’s a piece of history from World War II and is a place you should visit if you are there.

Although I don’t consider myself a beach lover, I do love to see them.

Another sight you want to see is Bird Island.

Don’t be expecting a bunch of birds on an island, but it is a nice sight to see.

It’s more of a big rock in the ocean, but one of the best sights on Saipan.

I’m not sure if you can actually go to the island, but you can inquire when you’re there.

Snorkeling is one of the best things to do in Saipan, especially if you love swimming.

The Grotto is a great place to see, but it’s an even better place to go snorkeling.

They offer snorkeling tours to the Grotto, but you can book it with other adventures if you’d like.

I haven’t gone snorkeling at the Grotto, but I did walk down to see how it looks.

It’s a great sight and probably even better snorkeling.

Go carts are fun no matter where you go, but it’s even better when you’re in Saipan.

It’s one of the most fun things to do in Saipan, as they do have the biggest go-cart track in Micronesia.

The carts are not special and they are also pretty old, but I guess It’s that feeling of being outside and doing something you didn’t expect.

This is a great way to kill an hour, so give it a try.

You don’t need to be a fisherman to go fishing and that is one of the better things to do in Saipan.

I’ve never caught anything bigger than a foot, so I do plan on trying this on my next visit to Saipan.

If you want to have some fun in the sun, go fishing in Saipan.

If you are wanting to “get out there”, taking a mountain biking tour will be a great idea.

It will help you enjoy the beauty that Saipan has to offer, it’s fun, and it’s great for your health.

It’s also very affordable and makes for a great way to see the island in a different way.

Off-roading is fun for everyone and you can also do it in Saipan.

Not many places offer a nice place for off-roading, so you can book a tour with Marianas Trekking and explore some jungles with a nice view of the ocean.

This will be done on an ATV and I think it is well worth the $65.

You can also book this together with some snorkeling at the Grotto, so consider doing that if you want to save some money.

If you know who Amelia Earhart is, you’ll know that she was the first woman to fly around the world.

What’s even better to know is that it is believed that she was spotted on Saipan.

Since then, there’s been a whole lot of dedication to the woman of the air.

Take a tour with Amelia, if you are looking for something different to do.

Things You Should Know About Saipan

You should know several things about Saipan before you even get there unless you want to make things harder on yourself.

Traveling to Saipan is like going on any other vacation.

So, before you get on your flight, here are several things you should know about Saipan.

Things are tricky when it comes to having a US passport and traveling to Saipan.

One day you will need your passport and another you will be good with proof of citizenship and a valid ID.

For other countries, however, you will need a passport.

For US residents, I recommend you have a passport, just in case it happens to be “one of those days.”

Saipan is a United States commonwealth, so they follow the same laws and rules.

They have a government, they run elections, and they have a culture that they live by.

Just ensure you carry your passport safely and obey all other rules and laws.

If you haven’t traveled to the Southern Pacific part of the world, it’s worth noting that they are all very small islands.

Saipan is one of them.

They may be small, but there are people, a culture, and a government.

At just 12 miles long and 5.6 miles wide, you can only wonder what there is to do on such a tiny island.

Don’t let that discourage you, though, as I’m sure its warm climate and sunny beaches are enough for most.

If you come from a country with lots and lots of people, you might be shocked to know that less than 50,000 living humans are on the island of Saipan.

It’s not a lot, but as mentioned earlier, they have their own culture and way of living.

Just don’t be expecting large amounts of people, as this is not a big country, to begin with.

It’s safe to say that you won’t need to exchange any money if you come from the United States.

To some, this is a no-brainer, but if you know nothing about Saipan, you will definitely question the type of currency they use.

So, if you’re wondering what type of currency Saipan uses, wonder no more.

5. The Native People are Chamorro/Carolinian

Saipan has real, living, people and they don’t live in huts.

It’s a very common “joke” that some tend to laugh about but it’s actually not funny.

They have houses, restaurants, and stores just like you would find anywhere else.

There is an entire culture that the people from Saipan have and all walks of life move to and retire in the paradise that Saipan is.

6. Saipan is NOT Cheap

If you want to have fun, you need to cough up some dough.

Unless you’re in one of my favorite places to visit, the good old Philippines.

However, that’s not the case, and you’ll need some money to get around.

Food is averagely priced, but this will not be a vacation where you save some money.

Unless you put in the work.

If you are a big eater like me and have a ton of other mouths to feed, you will like the amount of food that some of its restaurants give.

If you’re looking out for that figure of yours, you might want to share it with someone else.

And, if you have a big family like me, just order half of what you usually order.

Conclusion – There are Many Things to do in Saipan

Although small, there are still many different things to do in Saipan.

When is the next time you’ll be able to swim in the ocean?

When will you be able to go fishing or play on one of Saipan’s awesome golf courses?

Take advantage of the time you will be spending in the Northern Marianas Islands and enjoy what they have to offer.

I’m sure things will be changing, so we will update you if there are any other things to do in Saipan.

Until then, travel light, be safe, and enjoy your stay.

Why You Should Always Carry a Folding Map – Even With Google Maps
Next Post:5 Better Reasons to Back the Prone Cushion Ergonomic Cushion