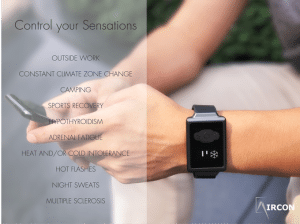 Aircon Watch Review – Is it Really That Cool?

Living in a scorching and humid place is not the greatest thing and carrying around a fan is out of the question.

So just like anything “cool” out there, I ran into this product and had to see what it is all about.

With that, I was able to put together this Aircon Watch review to help me, and now you understand what you are really getting and if, in fact, it is worth it.

As it is a Kickstarter product, I was immediately intrigued as they not only have a bunch of cool gear, but they have stuff that is not even out yet.

There is something about watching a Kickstarter project take off that can be immensely satisfying.

For those that don’t know (probably anyone) Kickstarter is a crowdfunding site that lets would-be customers help launch products that they would like to purchase.

The Aircon watch is just such a product.

This unique accessory is in the theoretical stage of development right now, but a buyer can hope and dream, right?

The nice thing about Kickstarter is that this site is where buyers can turn their fantasy products into real-life accessories that they can carry about with them.

Who This is For

So, is the Aircon watch right for you?

Let’s start by looking at what makes it special.

In addition to being a watch, this product also serves as a device that is designed to keep you cool.

Basically, it features an air conditioning component to it.

If you are athletic (or somewhat athletic), you can make your post work out cool down easier than ever before.

Or maybe your office building isn’t temperature controlled to your liking.

The Airon Watch can help you out with that as well.

The watch can also be used for heating you up during the colder days of the year.

The basic premise of the device is that you never have to be uncomfortable in your own skin again.

We certainly think so but let’s now take a look at how this innovative product works.

The Aircon works by heating and cooling itself to trigger a response in your body that will help regulate your overall body temperature.

Basically, it serves to help you treat your body like a thermostat, hacking it into keeping you comfortable at all times.

The manufacturers of this device claim that they have engineered it under the watchful eye of surgeons, scientists, and other doctors.

In other words, this body hacking “should” be safe.

The device is located on the wrist because much of the cardiovascular system interacts at this location of the body.

The watch stimulates the veins in your wrist for increments of fifteen seconds at a time–which should be enough to promote the change that you are hoping to experience.

All of the temperature adjustments are made on the face of the watch itself.

Users can control the temperature and select from a range that goes from 12-40 degrees Celsius.

And, of course, it also functions as a watch.

The State of the Campaign

As we mentioned in the last section, this is a Kickstarter product, which means that it is not experiencing traditional production.

Whereas most products go straight from the factory to the store, the Aircon is in more of a “make to order” stage of production.

The project is actually completely funded now and in fact, it has lapped its funding goals many times over.

When products on Kickstarter gain so much traction that they surpass the financing goals they can keep going and earn even more money so that the creators can continue to improve their products.

That has happened in a big bad way here.

The original goal set by the makers of Aircon was to raise $38,000 and at the time of writing this, they have raised over two million dollars.

So, it’s safe to say that they are doing pretty well, but whether or not the product ships, only time will tell.

Even big named companies will willingly choose to go the crowdfunding route, as it gives them the opportunity to cater their product directly to the expectations of their audience.

It also helps to keep costs low by giving the manufacturers a crystal clear understanding of how many products to make based on public interest.

In the case of this product, public interest was clearly very big.

It’s safe to say that in this day and age, the only thing that can be presumed about a funded crowd-sourced project is that it will benefit from a loyal built-in audience.

So, Does This Product Even Exist?

It does, but only in relatively small quantities.

As we said, the Aircon watch is still kind of in the “made-to-order stage.”

Early models are currently available, but wider distribution is not expected until this winter.

But just like the Dayfarer and other Kickstarter products, they have launched, delivered, and are back in reproduction thanks to popular demand.

Hurry up and ship those watches, people!

UPDATE: Aircon Watch seems to be a scam! Do not buy and do not share!

Right now, the only way to get an Aircon watch is by going directly to the company themselves.

They have their products available on their Kickstarter page where you can go and buy the watches directly from the supplier.

However, you won’t be able to get the watch until the product deadline closes.

Currently, the project is scheduled to be concluded in December, at which point it should be more broadly released.

Should I Just Wait Until December to Buy One?

You can, if that is the route that you would prefer to take.

Granted, it is hard to say for certain how much a product that is not on the shelves yet will actually cost when it is released.

Do keep in mind that this is a “project” and you need to consider that before giving any money away.

I prefer campaigns with more than one video, with “real” people using the products.

It is, however, worth mentioning that Kickstarter product release dates are often subject to delay.

Even this project has already been delayed several times, and I’m sure no one is happy.

If you do pay for the watch now, only to find that the release gets delayed again, you probably are not going to be able to get a refund.

If you would feel more comfortable waiting to spend your money on a product that already exists in this world, you may want to wait.

The Gootium High Density Thick Canvas Backpack – Unique and Affordable
Next Post:How to Set a Budget For Backpacking the World