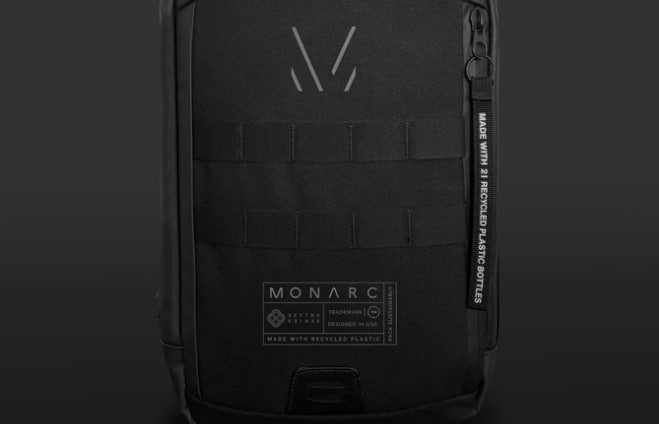 This Monarc Sling review will show you precisely what you need to know before putting your money into this Kickstarter product.

I have been a follower and fan of this company, and I must say, I am a fan.

Ironically so, they have created what I was looking for – a bag that can fit my daughter’s iPad!

I have been to many stores and reviewed so many bags, but I could not find something so simple.

Not to mention, I run an entire website dedicated to bags and cool things!

However, that’s one of the benefits of doing all kinds of research for the latest and greatest gear.

You get to see what’s new, and you can find products that others might be looking for.

This time around, I found that nice bag that isn’t too big, not too small, that will allow me to haul around my daughter’s iPad.

There’s a lot more to look forward to, so let’s see what else the Monarc Sling (and wallet) have to offer.

Overall, there’s a lot to like about the Monarc Sling. Be the first to own one, all while helping the planet and looking cool in the process. Get your hands on one as these prices will not last.

What You Should Know

There are several things in this Monarc Sling review that you should know before spending any of that hard-earned money of yours.

The Monarc Settra Sling is not the typical product you buy on Amazon or one of the thousands of online stores.

It comes from an exceptional place and has a unique way of doing things.

So, before you make any buying decisions, here are some things you should consider.

1. The Monarc Sling is Crowdfunded

If you’ve never purchased a product from Kickstarter or Indiegogo, this part of this Monarc Sling review requires most of your attention.

As a crowdfunded product, they haven’t mass-produced anything.

The company created a few slings, the idea is presented, and now, they need people like you and me to fund it!

How awesome is that?

That’s what crowdfunding is, and that’s why we have Kickstarter and Indiegogo to assist the seller and us.

If you plan to “buy” the Monarc Sling, understand that you are pretty much making a pre-order.

Read more here for a better understanding of what crowdfunding is.

2. The Monarc Sling is Made With Recycled Bottles

The boys at Monarc think the same way I do and are doing a lot more than just thinking.

They have created Monarc bags with our planet in mind and a passion for cool and functional gear.

They started with the Monarc Duffel (get into that later), and now they have the Monarc Sling.

If you feel any Monarc products, you will not believe they used plastic bottles to make them.

That’s what they’re made of and one of the main reasons I have chosen to back the Monarc Sling.

3. The Monarc Sling is Beyond Affordable

Shopping for a solid everyday carry is no easy task.

Most usually get one and stick with it regardless of whether it is functional or not.

Bags, backpacks, slings, and whatever else men want to use to carry their essentials is cool.

No longer are women and purses the only way to live.

We, men, need an EDC of some sort, especially when your wife loses her mind when you ask her if she can put your mask in her purse.

Forget the argument and forget about getting one type of EDC.

Grab yourself a few.

Get one for those short trips to the mall and get another for those days you need to haul more stuff.

4. Monarc Ships Anywhere in the World

One of the better things about crowdfunded products is that they aren’t bound to just one or a few countries.

At least most of them.

They usually ship anywhere globally and typically don’t cost much either.

I’m sure most of you are living in the continental US, but others like myself have decided to live elsewhere.

This is great and all, but not so much when getting things shipped.

I have to ensure certain products can get shipped to my location and require a lot more effort than necessary.

With the Monarc Sling, they ship to wherever you want.

If I had been deployed to Iraq like I was back in the day, I could’ve gotten this bad boy sent to me.

Just another great reason why I recommend the Monarc Sling.

5. This is Monarc’s 2nd Kickstarter Campaign

Crowdfunded products can be tricky.

Not every product on Kickstarter will be funded to start production, leaving you without a product.

With Monarc, they have already met their minimum goal of $10,000.

On top of that, this is not their first rodeo.

They have successfully created the Monarc Settra Duffel bag and are now selling that on their website.

Like the Monarc Sling, that was a Kickstarter product and is now on its own, doing well.

The Monarc Sling is headed in the same direction, and with backers like us, the Sling will do just fine.

Back the Sling, and save here!

Some find it hard to trust crowdfunded products as they are pretty much pre-ordered.

Monarc not only had a successful campaign, but they always reached out to me with any help I needed.

Their main product (the Settra Duffel) was funded through Kickstarter and is now a successful product on its own.

They didn’t hype things up and not deliver.

They excited things up and gave a product that people liked.

That means production has started, and now they will work on getting the Sling out to its customers.

Okay, it’s not so much a bonus, but for $10 more, I think it should be considered.

As a fan of man gear, wallets are always cool.

You can never have too many, even if we really only use one.

That’s how I usually do things unless it becomes obvious that I need a new one or I find one that I can’t seem to put down.

Yup, there’s an option for you to get a wallet, and it’s not going to tear a hole in your current wallet.

For just $10 more, you can add the Monarc Wallet to your order.

That’s a no-brainer to me, but I’m sure you can decide on what fits your current budget.

Get your sling and wallet here

There’s a lot to like about the Monarc sling.

It’s affordable, looks great, and will fit the stuff you need for those not-so-busy activities.

Did I mention you’ll most likely be the only person you know with a Monarc Sling?

I’m backing the Monarc Sling, and I think you should too.

Thanks for reading this Monarc Sling review, and I hope you can make a wiser decision.

If you have any questions or would like to share your two cents, feel free to do so in the comments section below.

ForeverPen – The World’s Tiniest Pen
Next Post:7 Best Places to Work Remotely When Home Gets Too Busy