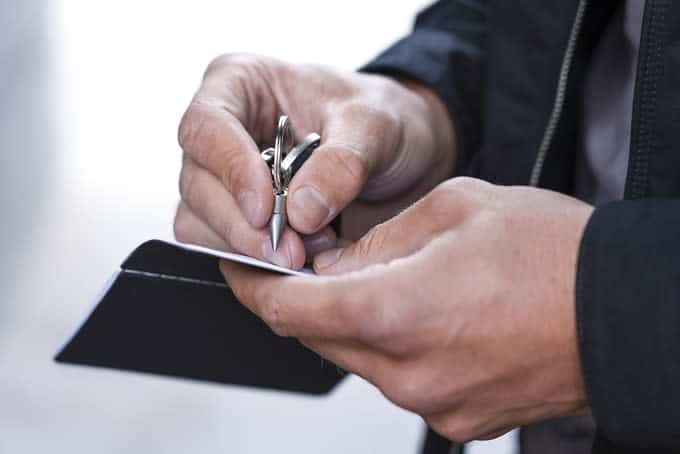 Have you ever purchased a super expensive pen, just to have it run out of ink faster than you could write?

It happens all the time and you’re left with, at the very least, a nice little decoration to add to your already cluttered and overloaded pen cup.

Well, there seems to be a pen that will not only never run out of ink but it’s also small enough to not even remember it’s there.

It sounds too good to be true or perhaps, it has you wondering how such a thing could be possible with something that requires ink.

With that thought in mind, let me introduce you to a pen that claims to do exactly that.

There’s more to such a tiny pen, so let’s see what will be the deciding factors on whether or not you should throw some money into the ForeverPen.

If you haven’t seen the video for the ForeverPen, now would be a great time to grab some popcorn, scroll up and hit play.

Marketing videos always do the best at selling things, so let that video do its thing before we get deeper into this pen.

The ForeverPen is a crowdfunded product through the Indiegogo platform and was created by TWO SO AND SO’s.

The idea came about, when these guys wanted “something to have with you all the time, that was small enough to never forget but functional enough to need often”.

That, of course, was referring to a pen and probably the best boxcutter/all-purpose thing that can be used to poke things.

It’s very much small, looks very cool, and can do some things your regular old Bic pen can’t do.

The ForeverPen’s first job is, of course, to be a pen.

It’s going to write for you, when you need it most, especially when you don’t have access to one.

And if you’re not in need of a wonderful writing utensil and need to open that Amazon box you just got, then guess what?

The ForeverPen is there for you to use.

Just give it a stab, slide it on down, and voila!

You just opened a box without having to get up and look for that boxcutter that you probably misplaced in the first place.

The best thing I like about this pen is what it can do for the artsy-crafty type of person.

When you need to make that straight edge for one of your projects, the ForeverPen is there.

Personally, I think that’s the best and most useful thing about this pen.

So, you see, the ForeverPen is not your typical pen.

It does more than write and look cool.

However, what type of “writing” would you be able to do?

Ehhhh, that’s where the whole pen idea kind of gets me thinking on whether or not it’s actually a pen that you are buying.

We all know that the ForeverPen doesn’t come with ink.

That’s great and all but what type of writing will it produce?

How will you get that “inky” look if it isn’t ink?

This is ink we’re talking about here.

However, let’s not think too much and get our tiny brains aching and let’s let the writing speak for itself.

The ForeverPen is made out of “solid silver composite”, which means that this is pretty much metal that you are writing with.

Reminds me of when I was a kid and I used to write on the road with a rock.

That’s very similar to what the ForeverPen is about and why it will never run out of “ink”.

So as we can see, this isn’t going to be the best bet when it comes to doing actual pen things but at best, it’s probably better at doing other things.

There are certain things that would have me pull the trigger if I was considering something like the ForeverPen.

First, this thing definitely adds a nice piece of cool-guy gear to my collection.

I’m all about coolness, especially if it has some type of functionality to it.

I’m not a fan of carrying pens in my pocket, due to the ink-ness that can occur, so it’s great to have something that can do the job of a pen but not really be a pen.

It’s not going to add much to your already busy set of keys and it actually serves a purpose.

Did I mention that this will also make you cooler?

Yup, and it will make for a nice conversational piece as well.

It’s also worth mentioning that it will never run out of ink, it won’t smudge, and you can actually write upside down or from any angle.

With every cool piece of gear that I own, there is usually at least one thing that I wasn’t a fan of.

With the ForeverPen, it’s going to be the fact that it still doesn’t work as a normal pen.

Yeah, it might never run out of writing juice, but it still doesn’t write and look like real ink.

Besides that, at the very least, we know what we are getting if we do decide to purchase the ForeverPen.

So, how much will the ForeverPen run ya?

Let’s just say that these guys priced this thing perfectly.

I know this is nothing more than a tiny piece of metal but I’m sure you weren’t expecting to pay $5 for it either.

For something so small, the price point has to be just right if anyone will even consider a product and that’s what seems to have been accomplished here.

The ForeverPen is going to run you a whopping $35 a pop.

Or should I say, pen?

Anywho, that’s where it all starts, until you get smacked in the eye with a bunch of different price points.

And if for some odd reason you need a bunch of ForeverPens, you can get 10 of them for $136.

Don’t forget that there are titanium, brass, and copper to choose from, so mix and match as you please.

I must say, I am a fan of ForeverPen and this is a nice piece to add to your everyday carry.

I like that it’s cool, unique, useful, and does have the capability of writing if need be.

Do remember that this is not going to replace your Pilot pen and it isn’t going to be something you would want to add to your pen collection either.

It may be advertised as a pen but I would look at this as a quick note-taker/multi-purpose tool but that’s about it.

The price is nice and it serves a purpose, so yes, I recommend the ForeverPen.

That’s what I think about it, and you bet that I’m curious as to what you think.

So please, do share your two cents in the comments section below so you can influence (or not) others on why you think they should or should not buy the ForeverPen.

Backpacker, biker, adventurist, gear collector. But before any of the fun stuff, I am a dad and professional toilet cleaner. I live life to the fullest and will take on any adventure but God will always come first.

The NEX 3 in 1 Bag Mate is Actually Worth Buying
Next Post: Monarc Sling Review: 7 Things You Should Know